Speed, Sensitivity, and Resolution for R&D and Science Applications

The FLIR X8500sc is a high-sensitivity, high-speed, high definition MWIR camera designed for science and R&D applications. Advanced features such as on-camera RAM/SSD recording, combined with 1280 x 1024 resolution and fast frame rates, allow researchers to fully image the scene and stop motion on high speed events – whether they’re in the lab or on the test range.

The X8500sc has a cooled FLIR indium antimonide (InSb) detector that is sensitive enough to detect subtle temperature changes, down to <20 mK. Save up to 36 seconds of data to on-camera RAM without worrying about dropped frames using FLIR’s DVIR. After recording, and then play back from RAM or save to the removable solid state drive (SSD) in just 90 seconds and be ready to begin a new recording. The X8500sc also streams high speed 14-bit data simultaneously over Gigabit Ethernet, Camera Link, and CoaXpress for live viewing, analysis, or recording. 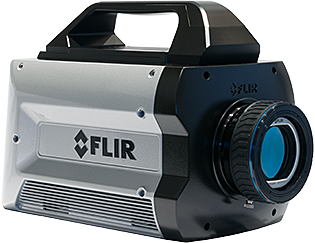